A place with unusual beauty lies in the Þjórsárdalur valley high up in southern Iceland named Gjáin. Often referred to as “one of the pearls of Icelandic nature”, this picture-perfect area consists of a small gorge with waterfalls, lakes, and beautifully formed volcanic structures. 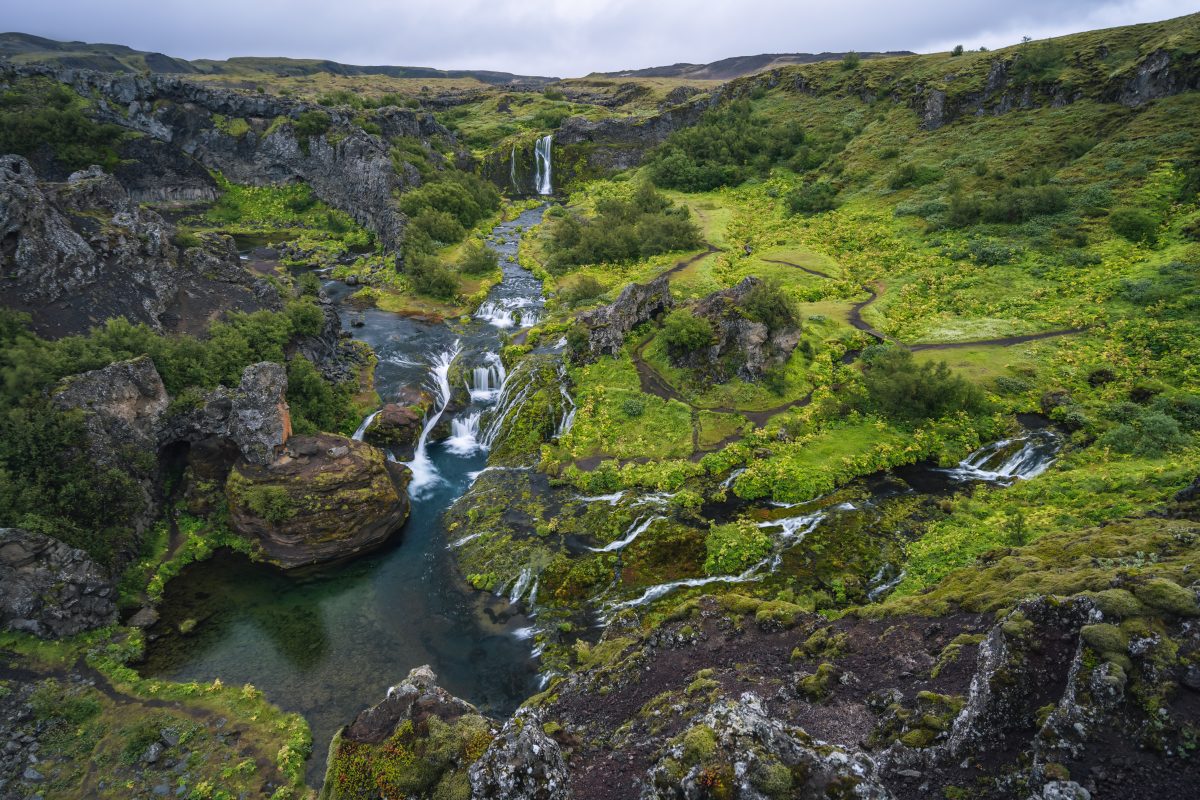 It is less than half an hour’s hike from the historic farm Þjóðveldisbærinn Stöng, a Viking settlement, with a clear view of the notorious Hekla volcano. It’s a good idea to make time for this surprising Icelandic landscape when visiting the spectacular Háifoss and Hjálparfoss waterfalls.

By car, the Gjáin car park is set exactly 2 hours’ drive from central Reykjavik (135km). You take Route 1 to Skeiða-og Hrunamannavegur. You then turn left and travel about 18 kilometers more. You’d need a 4 wheel drive to get to this point as it’s a long dirt road however if you don’t have one, you could walk two miles on relatively flat and easy terrain before reaching the valley. The other prerequisite is to head to this spot in the summer months – June to October because in winter the valley is dangerous and virtually inaccessible.

The valley itself is nestled in the mountains, with an oasis of lush vegetation and numerous small but powerful waterfalls dotted all around the region. The main river in the valley in older times was the Þjórsá, the longest glacial river in Iceland. It poured through the valley before being diverted by a causeway between the Sandafel and Skjeläfell mountains. 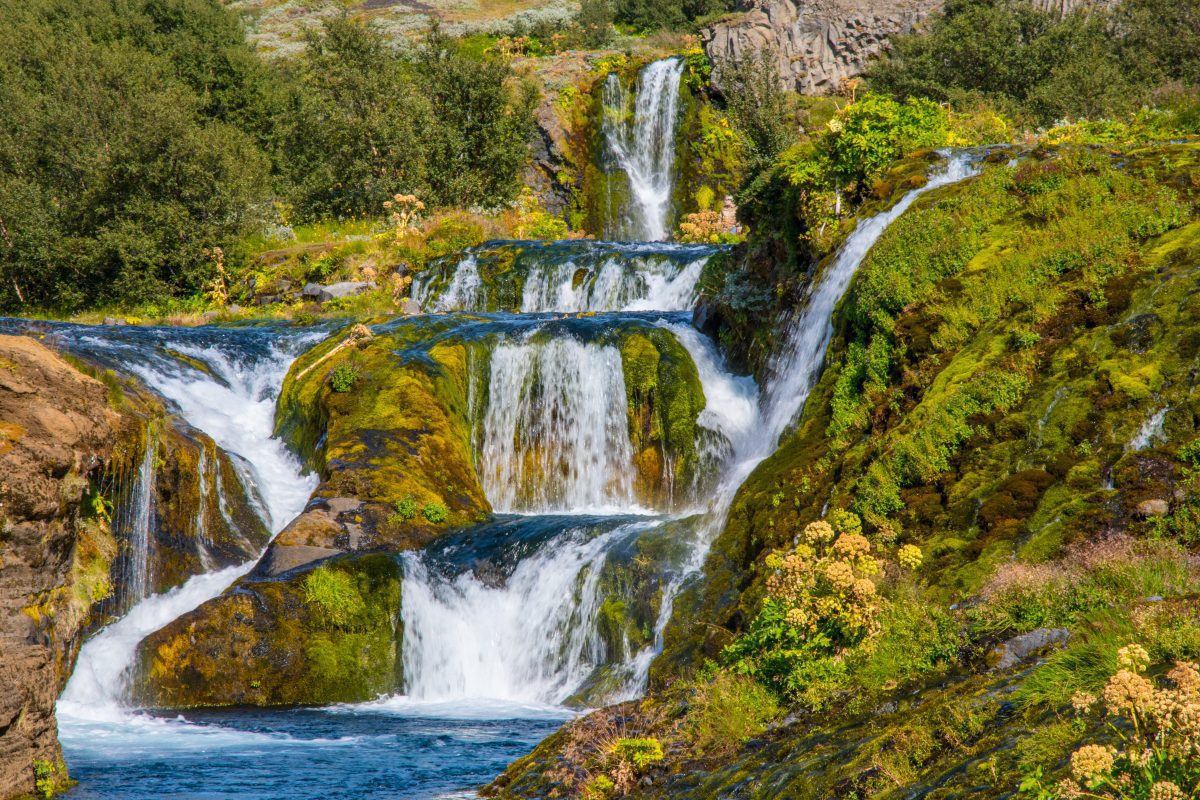 Today the Raura (Red River) flows through it and feeds the main waterfall. It is a two-tiered small cascade called Gjárfoss, or ‘Waterfall of the Abyss’, and there are smaller waterfalls around it with clear pools at the foot, surrounded by lava fields (the last one crossed the valley about 4000 years ago), basalt columns all around, lava caves and volcanic tuffs. This area is said to evoke associations with the birthplace and abode of fairies and elves. 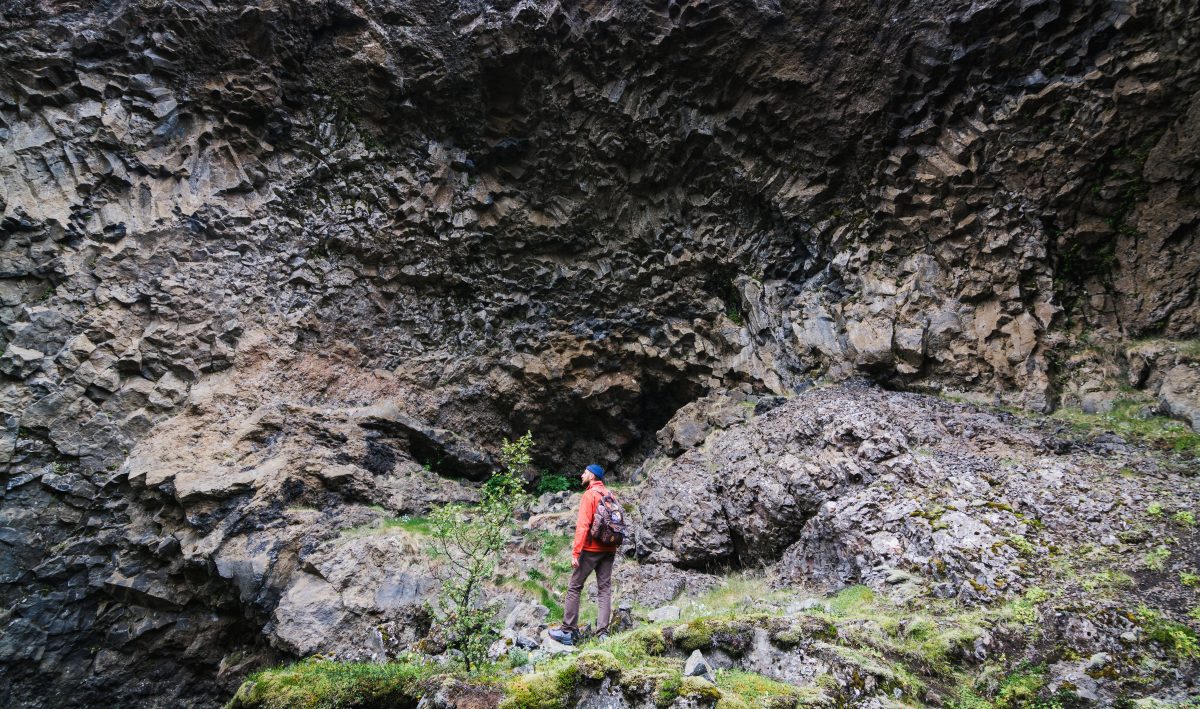 The collection of waterfalls gives the impression of an exceptionally picturesque and tranquil place – visitors often say they are filled with a ‘heavenly feeling’: Some of the waterfalls conclude in small or larger ponds, surrounded by finely cut basalt columns, along whose ledges one can reach the individual cascading levels of the falls; others offer a picture of many wildflowers and greenery; a third option is the confluence of some smaller cascades of the local Raura stream, which lead to caves or deep alcoves. Overall, this whole landscape exudes a strong sense of the spirit of the valley.

The unique landscape of this region impressed the creators of Game of Thrones, and they considered the valley an ideal location for filming the “Dance of the Water” scene (season 4, episode 5) in the movie – the one with Arya Stark and her traveling companion the Hound in the series. The film is also said to pay homage to the location by increasing the number of tourists visiting the area. 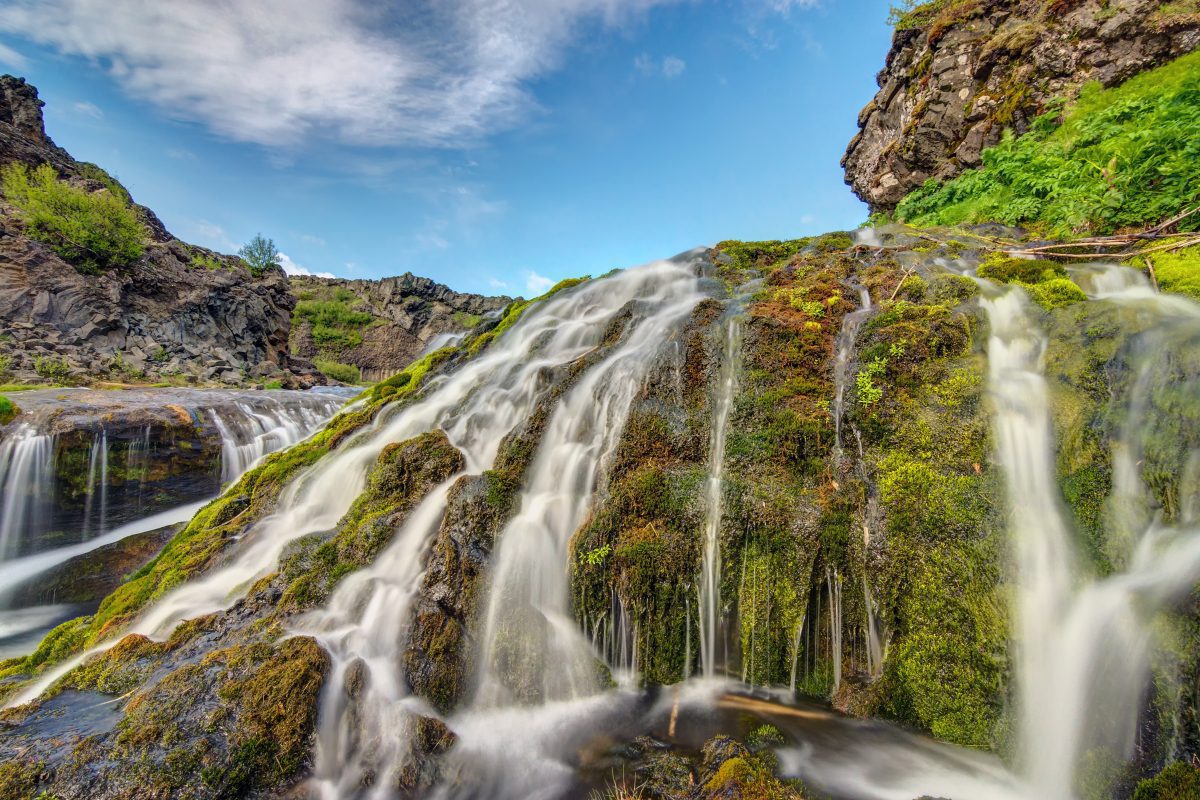 Stöng Farm and its archaeological heritage

Close to Gjáin, you can find the reconstructed medieval farm of Stöng. It is supposed to be the only archaeologically excavated structure in Iceland left from the settlement era that still stands above ground. According to an inscription next to it, it was originally depopulated and subsequently destroyed when the Hekla volcano erupted in 1104. 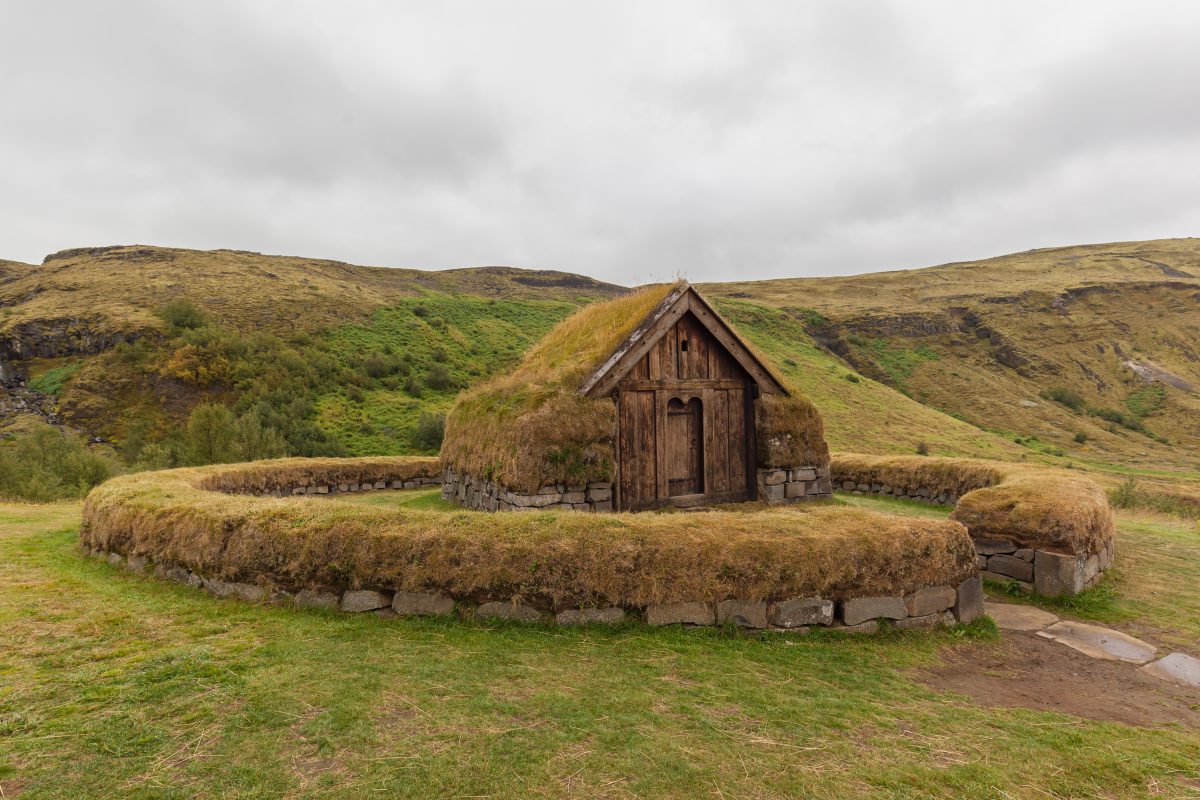 This eruption led to the destruction of some 22 settlements in the Þjórsárdalur valley. Mount Hekla is one of the most active volcanoes in Iceland, having erupted at least once in every century except 1400. It was not until 1939 that Danish, Icelandic and Norwegian archaeologists excavated the farm as the first such effort by trained professionals in Iceland. The excavation of the farm led to discoveries in the way the archaeologists dated the artefacts they found through the analysis of skeletal remains, and significantly enriched the understanding of Iceland’s early history, cultural heritage, and the past geological activity that affected them. It is even thought that this data may help in the preparation and prediction of the next eruption, which will undoubtedly leave its mark on the cultural layers – at least this happened after the eruption of Eyjafjallajökull in 2010 and of Fagradalsfjöll in 2021.

There are numerous pathways in this area that lead you to natural wonders. If you want to take the proper hiking routes, you have two options. The first option is to hike to the top, which is approximately a little over 2 kilometers long back and forth. The trail above Gjáin and inside the valley is very rocky and uneven therefore you should use caution should you choose to hike to this point.

The other hiking option takes you to the parking lot on the south side of Gjáin, where you can descend steps and reach the lava caves and the smaller waterfall. There are also clear springs bursting from the lava. And the lava itself offers bizarre formations in which the imagination can discover faces and figures of trolls.

Want to explore the gems of South Iceland? Why not book our 3-day Express Iceland Guided Tour.